Nestlé S.A. is a Swiss multinational food and beverage company headquartered in Vevey, Switzerland. It is the largest food company in the world measured by revenue. In 2007, they came to Taiwan intending to find a qualified supplier making Nestlé beverages, namely, Nescafé Coffee and Nestlé MILO. Besides having their own World Standard processing equipment testing and production procedure systems, Nescafé also requested meeting GMP certification and custom-made mixing turnkey system.

Three years later after negotiation, commissioning to the extra purchasing, Mill Powder Tech (MPT) delivered state of the art powder processing equipment with high production capability. When you walk into the plant, you can see a large production system with six ribbon mixer (mixing blender) processing lines - three for Nescafé Coffee and another three for Nescafé MILO, packing in highly intense speed. The whole industrial blender turnkey project was rigorous, but MPT pulled it through with their seasoned powder handling processing equipment building experience. 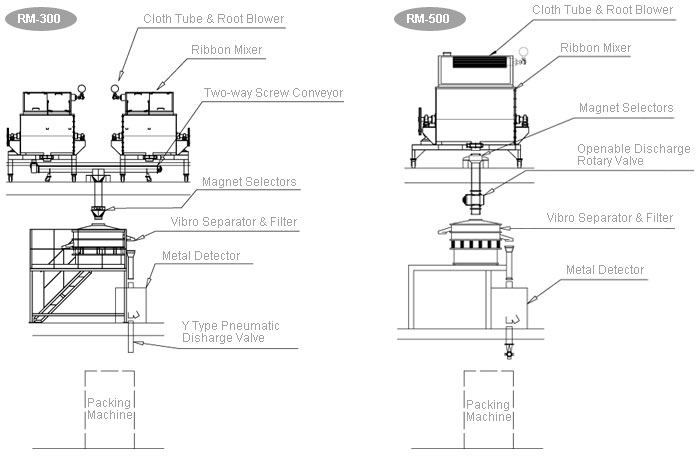 In Nestlé's custom built processing plant, horizontal mixers (RM-300 & RM-500) are used for the 3-in-1 coffee and MILO powder mixing process. They are a total six powder handling processing equipment lines; they are GMP certified patented (patent # I311923), meet Nestlé International Processing and Production objectives and – is the only one in Taiwan.

Industrial cone blender is applicable for mixing particles such as drugs that are made of various components with versatile gravities. For RC-3000, its production capacity is 50 to 3,000 kg and 120 to 7,000 liters.

Because of the conical shaped blender and the separated motors (outer barrel and inner blades), cone mixer is able to spin at an angle of 0 to 360 degrees with 4-way mixing action. Overall, it is an optimal mixer for products of high viscosity and density.

Double cone mixer, DC-50 and DC-100, is an economical blender that is used to combine multiple small batch materials including food preparations, cosmetic manufacturing, resin powder additions, 3-in-1 coffees, herbal medicines, plastics, vitamins and minerals etc. It is an efficient and adaptable blender for mixing dry powder and granules homogeneously.

Looking for more information? You can fill out the Inquiry Form to tell us your needs or questions, we will respond soon!

For LIVE HELP... just click "Live Help Desk", our specialists will be with you in air shortly.